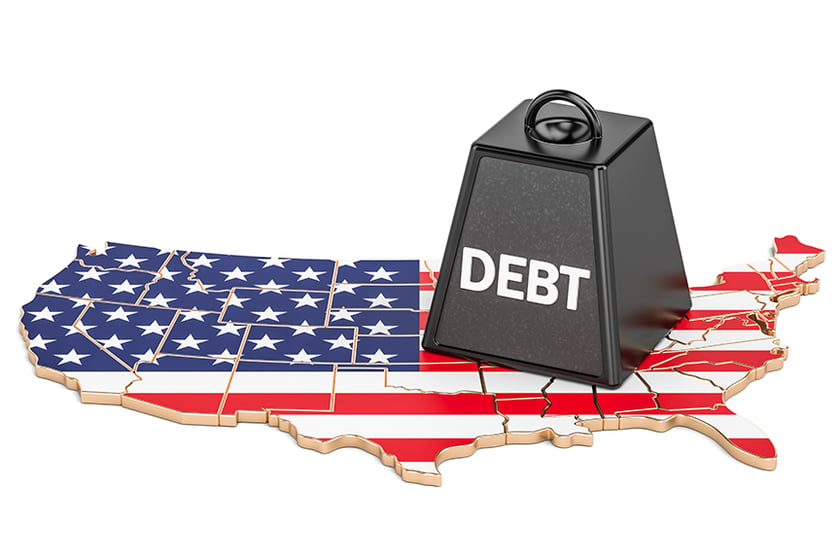 Should you worry that debt relative to GDP is rising fast here and globally?

You hear a lot of worrying about mounting  government debt because many people are convinced that public debt is a main source of  problems for any economy. And currently the debt ceiling limit – the legislative limit on the amount of  national debt that can be incurred by the U.S. Treasury, essentially limiting how much money the  federal government can borrow, is suspended through the end of July.

But while proof that the growth of government debt leads to disaster is weak, it is worth paying attention to because high public debt will restrict the ability of any country to address the next crisis.

This sentiment reached hysterical levels in the U.S. in 2010, when even the chairman of the U.S. Joint  Chiefs of Staff, four-star Admiral Mike Mullen, called  public debt the “biggest threat to national security.”  Debt fights culminated in a government shutdown that resulted in Standard & Poor’s stripping the U.S. of its AAA rating. This repugnance to government debt remains unabated in many circles.

The evidence, in fact, points in the other direction: Economic and financial disasters precede, rather than follow, a surge of public debt.

More worrisome for investors, however, is that there might be a real lurking danger in soaring private  sector debt, here and abroad. That could be where the next debt crisis might come from.

Total net government debt in the US went from $5.1  trillion in 2007 to $9.4 trillion in 2010 – an increase of more than 80%. Why? Because entire business sectors, mostly financial, were at the brink of collapse and the government had to bail them out.

This meant Washington ended up adding a vast amount of that debt – which it took on directly, or  indirectly by guaranteeing liabilities or injecting  capital.

The size of U.S. government market debt actually declined during the time when financial sector  liabilities doubled. The government debt growth came later, and mirrored the financial services industry’s  decline. And the financial crisis from that time period,  plus the recent COVID-19 pandemic, has led to our national debt standing at about $23 trillion today – and climbing

According to the Congressional Budget Office, since 1960, the federal government has run deficits in 55 of the last 60 years. And the resulting national debt  figure by decade is as follows:

But under the Congressional Budget Office’s projections, the federal government would run a  deficit every year for the next three decades. And by  2049, CBO projects the debt will reach $100 trillion or  147% percent of GDP.

What makes matters worse is that this problem is not confined to the US. In fact, according to the International Monetary Fund:

“Our data show that the global average debt-to-GDP ratio (weighted by each country’s GDP in US dollars) rose to 226 percent in 2019, 1.5 percentage points  higher than in 2018. Most of the increase came from higher public debt in emerging market economies and advanced economies outside of  Europe. In low-income countries, total debt rose by 1.3 percentage points of GDP in 2019—mostly driven,  in contrast, by higher private debt.” (Source: IMF  Blog, February 1, 2021).

But just like your personal credit card debt, while the size of the debt matters, the ability to make the  payments is even more important.

Consider this; Japan has government debt that has consistently remained north of 200% of its GDP, but  most of its debt was held by its own citizens, which has greatly reduced the risk of defaulting. Ukraine, on the other hand, defaulted when its debt was 30% of  its GDP.

A similar thing happened to Spain, which saw government debt explode from 36% to 100% of GDP.  Government debt declined while private debt grew until it became too large to handle. Eventually, the  government was forced to take it over to prevent an economic collapse.

What is the Lesson?

The lesson here is that huge run-ups in public debt levels are often a consequence of economic problems rather than a cause. The place to look for signs of  future trouble is the private sector.

Unfortunately, by this measure the world seems to be in a much worse place today than before the financial crisis. Driven by historically low interest rates, private corporations have accumulated very large amounts of debt in the last few years, and much of it is in the form of corporate bonds.

Looking at the increase of non-financial corporate debt in the US, the current expansion is the largest  and fastest on record. And in the last few decades,  similar expansions were followed by large and  damaging crises.

How many investors know that the total debt of  nonfinancial corporations has more than doubled over  the past decade, growing by $37 trillion to reach more  than $75 trillion – a growth rate far faster than the increase in government debt, which has received far more attention?

It is not surprising that the global debt of the private sector is growing so rapidly everywhere. Interest rates are still at historically low levels. And the incentive (and need) to borrow is huge.

This state of affairs is unlikely to last. Unless deflation – or disinflation – persists for far longer than anyone can imagine, interest rates will rise and the market price of debt will fall. This can trigger a large wave of selling, depending on the market’s perception of how fast rates can go up. Too many sellers and few buyers could lead to a new debt-related crisis.

The risk has not gone completely unnoticed. A few market economists have issued warnings, but so far  the general level of concern is very low.

Trying to protect portfolios by diversifying holdings among various sectors will not help in a real debt  crisis. Whenever panic strikes, correlations escalate – meaning even disparate assets behave alike. That  happened in 2008, when there were few places other than Treasuries to ride out the cataclysm.

The best course is to develop a plan for what to do if market conditions take a sharp turn for the worse.  This means having pre-planned exit points to limit the  damage and prevent over-reactions. It also means developing a plan for re-entry after the storm that triggered those exit points has passed.

Maybe there is no crisis lurking just around the corner. Maybe interest rates won’t go up soon, or  much. But a private-debt related crisis can be triggered for other reasons, such as credit-quality concerns. And given its gigantic growth, conditions for a debt-led crisis are lining up better than at any time  in recent years.